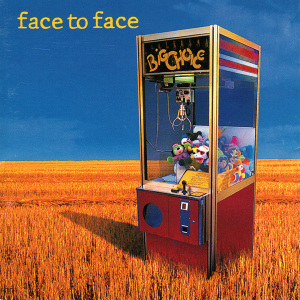 In my first year of college, I met my friend Brendan, and in between watching boat loads of horror movies and drinking boat loads of cookies and cream shakes at Village Inn, we listened to and talked about a whole lot of music. We already had some crossover favorites, but he also got me into a bunch of punk (or punk-ish) bands – NOFX, Blink 182, Pennywise, Propagandhi, and, you guessed it, Face to Face. Though there’s certainly a time for the lightheartedness of the first two bands, I always appreciated that Face to Face was more sincere without being super hardcore, and I love the singer’s voice.

END_OF_DOCUMENT_TOKEN_TO_BE_REPLACED

I grew up not really knowing about Cheap Trick at all. Maybe in a peripheral way, but that’s it. Some time in the past 5 years I picked up their Greatest Hits album, but it was a combination of the That 70’s Show opening + hearing some people sing their songs at karaoke + seeing a guy from a company we used to work with (hello Hothead!) sing this song at a live karaoke night for our former coworker Jen that drove me to it.

END_OF_DOCUMENT_TOKEN_TO_BE_REPLACED

I’m cheating a bit with this month’s theme, but give me a break.  I’ve been Hollywood for a week.  Also, June Power Songs were so much fun, and I still have a massive list of tracks I want to slot in there, so since it’s my turn to pick the theme, I’m extending power songs into July.

This post is gonna be quick, like this amazing song from Bad Religion.  I like Bad Religion a lot, but I’m not a disciple by any means.  Their album Stranger The Fiction is definitely in my top 100 albums of all time, but I realize for most Bad Religion fans that’s like saying Wings was Paul’s McCartney’s best band (I should also come clean and say that I don’t really love the Beatles).  But after The Gray Race I kind of lost track of the band.  Until True North.

END_OF_DOCUMENT_TOKEN_TO_BE_REPLACED

“Surfin’ U.S.A.”
by Pennywise (originally by The Beach Boys)
from the album M.O.M.: Music for Our Mother Ocean Vol. 1
1996
Buy the album on Amazon

So I completely blew it this week with no Karaoke Tuesday entry. There have been a few times in the past where Lance or I or both of us have been a little late, but this week I just totally dropped the ball. Normally at worst I might do it Wednesday and cheat by backdating the entry, but it just feels wrong to do that when it’s already Friday night. So you win this week, Lance. And apologies to all of our loyal fans (which is also just Lance).

END_OF_DOCUMENT_TOKEN_TO_BE_REPLACED

There will be another post where I expound on just how goddamn good the last Menzingers album is, but their new album just came out this week, and this song has caught me, and I completely love the video for it.

END_OF_DOCUMENT_TOKEN_TO_BE_REPLACED

I’m not sure when or why I first sang this at karaoke, but it’s been one of my staples for quite a while. I never got into the Dead Milkmen, with the exception of this song, which I always loved. Fun fact – I always had a friend do “Stuart” from the same album as a monologue in acting class.

It’s a testament to why I love my core karaoke crew so much, because I can pick this song, and not only will they know it (which is incredibly rare in that kind of setting), but they love it and back me up on the chorus. And man, is this a fun song to sing and bounce around to.